Setting up a village school library in Myanmar

If you were asked to help set up a new school library in a new primary school building in a farming village outside Mandalay, and you wouldn't be able to visit the site until the day before the new school's grand opening, how would you tackle it?  That was the challenge proposed to me last June by a parent service/charity group at our school.

PACE, which stands for Parents' Action for Community and Service, has built several schools in Cambodia together with the Tabitha Foundation over the past decade.  This year they teamed up with John Stevens and the 100Schools organization in Myanmar to build their first school there, in Shar Pin village.  And it is the first school built by 100Schools to have a library included. 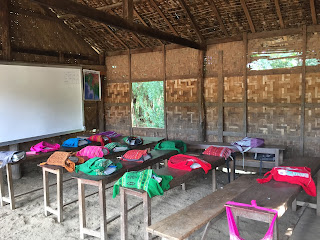 After (the library is the far-most left room): 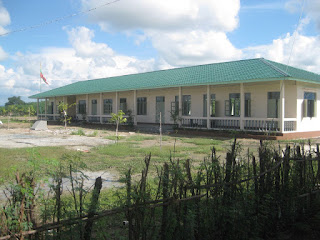 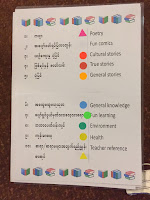 Luckily here at the East campus there is a Burmese parent, with whom I've done a couple of middle-school service trips to Myanmar.  Thet is not only bilingual, but highly organized, efficient, and creative.  She liaised with the Myanmar Library Association (MLA) to get us lists of recommended books to buy as well as book donations for the school.  She also got in touch with the Third Story Children's Books project, which publishes stories in ethnic languages for children in Myanmar.

Thanks to Thet's language and organization skills, over 400 children's books in Burmese were purchased or donated -- which we picked up once we arrived in Myanmar.  Thet and Thida, another Burmese speaker in our group, were able to sort the various books into 11 basic categories -- and the rest of us labeled them. 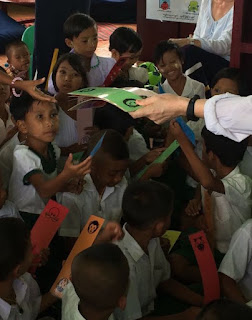 We also created about 80 laminated shelf-markers -- using simple animal logos and different colored paper.  The children were told that when they came to the library each time, they should pick an animal and a color to keep track of where they found books.  To help them remember where in the "village of books" (i.e., the library) each book "lived" -- so they could help it get back to its right place.

With Thet's help, I also did a talk about book care on opening day where I asked the children to consider how books are like people.  (They can be old or young, tall or small, speak different languages, have a front, a back, a spine, etc.  And they need to be treated with care and respect, especially when it comes to turning pages.) 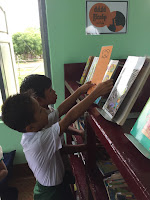 Through Thet's connections, we also met up with a wonderful young Burmese teacher and storyteller, Tess (aka Tin Ma Ma Htet), who works as a professional development coordinator for the Phaung Daw Oo School and the Monastic Education Development Group in Mandalay --and with the Third Story Children's Books Project. 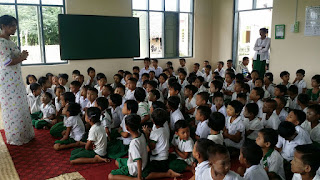 Small world connection:  Tess has also been involved with the teacher training project our Dover colleagues have done in Burma.  (See a video interview with her in 2015 here.)

Tess entertained the Shar Pin students with storytelling on Sunday, while the rest of us were setting up the library, and we trust that she will continue to visit Shar Pin to see that the books in the library are being fully utilized.

The school's official opening was Monday, October 3 -- and here are some basic shots of what the library finally looked like.


The PACE team was amazing -- and it was such an honor to work with them.  The cost of the whole 5-classroom school?  US$72k.  The library room itself?  US$7k.  US$3k went to the library design and materials.  I can't wait to do another.

Extra:  Thet took me a local civic library in Mandalay -- the Brahmaso Library.  It's a lending library with a reading room attached.  Closed stacks.  Card catalog.  But also with a digital terminal to content provided by UK universities and the British Council.  See photos here.
Posted by Katie Day at 2:04 PM