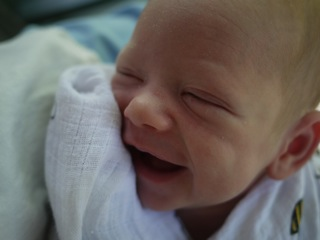 And here is his best smile for us! Wonderful news from the Emerson family!
Jenna and Chris  welcomed Reed Baxter Emerson into the world on Saturday June 30th at 2.46am, clocking in at 7lbs 2oz and 20 inches tall. Jenna says they are loving the world of parenthood, and promise us a visit after the summer break.

Posted by International School Libraries Network (ISLN) of Singapore at 12:48 PM No comments:

A look at ISLN dates for the next 10 months

A look-ahead at the upcoming (northern hemisphere) academic year, in terms of dates.


CORRECTION re location of Sep 13th meeting at AISS.  Not in the Senior Library, but in the Junior one (enter via Gate 3).

NB: We rotate the day of the week for our network meetings, in fairness to people's other after-school commitments.  So the December, February, and April dates will be on a day of the week that suits the host librarian, but will not be on a Thursday.